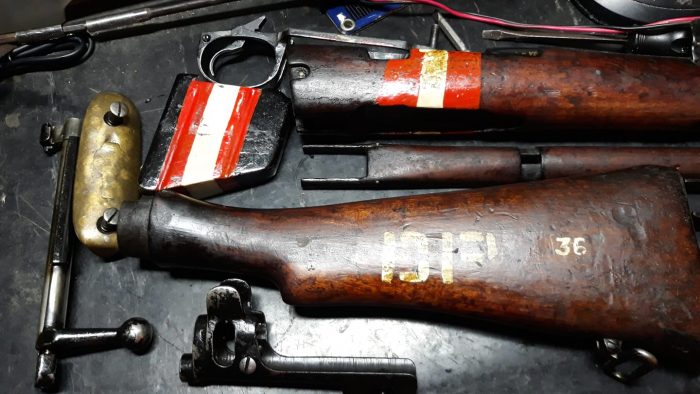 There are certain things that wear out or go wrong with a receiver that cannot be repaired. Some of them could only be decided by a Master Armourer at base repair level, because that was the repair level that possessed the tooling and gauges to measure the wear. Tools and gauges that do not exist today, so NO, your local gunsmith CANNOT check it over and deem it safe. Most likely he doesn’t even know the details that you are currently reading!
Every other part on a rifle can be replaced.
Receivers that have gauged as not able to safely do another stint after rebuild were ordered scrapped. Every part on the rifle was gauged, any that passed could be re used on repair of other rifles. When a request for Drill Purpose Rifles was received (they were commonly used for training activities that were seen to likely damage live rifles like obstacle course, parachute training, bayonet training and drill training, which also included loading aiming and dry firing practice with dummy cartridges) scrapped receivers were sourced and assembled with downgraded parts wherever possible. In the Commonwealth system, they were to be refinished externally to new rifle condition, hence some unabused DP rifles looking so good.
All downgraded parts were marked DP. Over time other things were done to help ensure idiots wouldn’t try to fire them. The tips were removed from firing pins, the firing pin hole in the bolt head were riveted or welded shut. Holes were drilled through the chamber. Stripes painted across the rifle made it very apparent they were not ordinary rifles.
DP Rifles had to be able to function to the extent of feeding and dry firing to meet their purpose. Bolts were not welded in, chambers were not filled with weld.
Importers of DP rifles into the US at one point had to agree to advertise and sell them as NON-FIRING as a condition of importation.
Naturally this rule did not apply to subsequent sale of the rifle, ending up with unsuspecting people buying and reversing any demilling like replacing firing pins and bolt heads and thinking they were now right to fire.
There have been a few cases where such a rifle has been fired and blew the timber apart because of a drilled hole in the chamber not being noticed. Serious injuries have also been noted. The more people that understand the process the better chance we have nobody will be killed on a range when the bolt comes flying out the back with 18.5 tons per square inch pressure behind it.