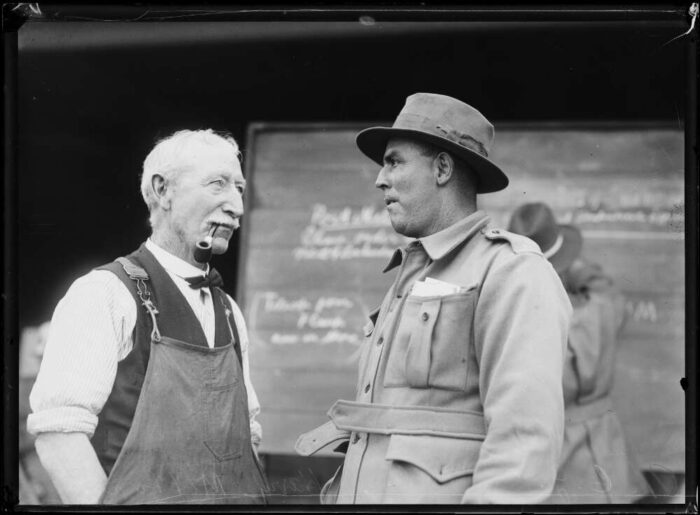 By Marker 31st October 1936 The Australasian

During my recent visit to Anzac range (Liverpool, N.S.W.) for the King’s Prize, which was so ably won by Wally Draper, captain of the Western Suburbs club. It was again my good fortune to meet and talk with that former all-round champion . of almost everything, Harry Motton. Although It Is many years since he pulled a trigger In open competition, he is Just as keen on the pastime as when he won his first King’s Prize at Randwick range (N.S.W.) In 1905, after a tie with his now son in-law, Stan Edwards (Wagga, N.S.W.), who also won four King’s Prizes and was second in three others. Despite his 74 years—Harry Motton was born at Westbury Tasmania in 1862—he still possesses those keen eyes which made him one of the most outstanding marksmen in the Commonwealth, in the days before the Great War. In recent months Harry Motton passed through Melbourne on his way to Perth to play with the New South Wales bowlers. Since retiring from rifle shooting this versatile sportsman has made a name for himself with the City Bowling Club (Sydney), where he can be seen regularly “rolling them up” with the youngest of them, and more than holding his own. My first introduction to Harry Motton was at Williamstown in 1907 during the visit of the British rifle team. Just after “Motty” had had a most successful trip to Bisley. Although he was not present at the final of the New South Wales King’s Prize, he was more than interested, as one of his sons (Harry, Jun.) by his consistent shooting for some years is among those who have strong claims to be selected as one of the New South Wales three in the Australian team for Bisley next year.

One of several brothers, Harry Motton in his youth was a leading jockey in Tasmania, where his services were eagerly sought after. Just at this time, when all sportsmen are looking forward to the Melbourne Cup—and all over the world where Australians are domiciled the first Tuesday in November means to them this great race—it is fitting that Harry Motton should be remembered. In 1876 he rode Mr. W. Field’s ‘Bella’ in the Melbourne Cup on a track which was nothing like the perfect course it is to-day. Dust and grit were thrown by galloping horses in the eyes of those following the leaders. That was the year when Mr. J. Wilson won the Derby, Cup, and Oaks with the great ‘Briseis’. The same year Harry Motton rode ‘Strop’—a Panic horse—to victory In the Hobart and Launceston cups. The horse was aged 14 years, and the boy on his back 13 years. Ten years before that ‘Strop’ had also won the Hobart Cup. He rode ‘Strop’ in the Australian Cup in 1876, and he piloted ‘Bella’ into second place in the Launceston Cup in 1877.

One of the most exciting incidents of Harry Motton’s career as a jockey was in a Hobart Cup. Motton was riding ‘Strop’, while Tommy Hales—that peerless horseman—rode ‘Southern Cross’. Riding a desperate finish, Motton’s stirrup leather broke, and but for Hales grabbing him by the jacket and lifting him back into the saddle he would have fallen. After a thrilling duel up the straight. Hales just defeated him.

Leaving Tasmania, the next important step in Harry Motton’s career took place in Charters Towers (North Queensland), where he was engaged in the bicycle industry. As a racing cyclist he won the five and 10 miles Northern Queensland Championships on the old-style high bicycle. While in Charters Towers Motton also played cricket and football. At one time he was referred to as the “Blackham of Queensland,” owing to his skill behind the wickets when captain of the Charters Towers club. My first record of him as a rifleman is in 1901, when he joined the Charters Towers club. In 1902 he was second in the King’s Prize (Q.), second in the aggregate, and second in the ladies’ bracelet at Rockhampton; won the Port Curtis match after a shoot-off and was sixth in the Adelaide King’s Prize to George Howitt.

With the Australian team Motton visited Bisley in 1903. and won a badge in the King’s Prize (finishing 39th); was 19th in the grand aggregate; third. Corporation City of London; and third highest scorer for Australia in MacKinnon Cup. . Assisting greatly by his coaching, Motton was presented with a silver cup by the Australian team after their success In the Kolapore Cup. He won a bronze medal for coaching in the Palma match, which that year was fired at Bisley. He was second in the Young, and third in the Mitchell matches at Toronto, and fourth in the Gibson at Ottawa, completing the year by winning a badge in the New South Wales King’s Prize. Several other important wins came his way before his next trip to Bisley in 1907.

With several others Motton paid his own expenses to the 1907 Bisley matches, and was included in the MacKinnon Cup team in which Australia finished third. In the Stock Exchange he defeated George Shaw (Q) by one point with an aggregate of 103 points over 200. 500.and 600 yards. Two days later he won the “Daily Telegraph” Cup from a field of 1.200 over 600 yards after a tie with George Shaw and five others. W. H. (“Billy”) Cutler continued to keep Australia’s name well before the public by winning the Prince of Wales prize, while G. Shaw won the All-comer’s match after a tie over 600 yards. Motton was well placed in the All-comers’, the St. George’s and the “Graphic,” and won the Corporation of the City of London match. When Lieutenant Walter Addison (Orroroo, S.A.), father of Gerald Addison, won the King’s Prize after a tie the Australians were certainly in high glee, especially as several others of the official team won many competitions. Returning home through Canada various members shot with success at the Dominion prize meeting. Accompanying the team to Australia was the British team, which included such champions as Ommundsen, Fulton, Wallingford, Raven, Lawrance, and Comber.

Always one of the first to be included in the New South Wales team for the Commonwealth match, Motton had several wins in various parts of the Commonwealth, but it was not until 1911 that be won his third King’s Prize at Randwick. when a member of the Australian Rifles. During his many years of active sport Harry Motton has won several hundred trophies, medals, and badges. Always of a quiet, retiring nature, he still enjoys the best of health, and a visit to his home at Greenwich (Sydney) makes one realise what a great sportsman he was—and still is.

Although Western Australia has selected its two representatives for the Australian team to Bisley, none of the other States has decided on its quota. Both Hilton James and Pat Lee seem certain to be two of the New South Wales three, while P. M. Gillies looks the logical representative from Tasmania. Clarrie Armstrong has very strong claims to be the Southern Queensland choice, but as to who will be chosen for North Queensland is not vet known. South Australia has several promising young marksmen, and should they decide to select Instead of shooting a test their two should prove worthy acquisitions. Young Tom Ashton by his shooting through the New South Wales matches shows that he is still in the forefront, while the veteran Walter Green must have a chance. At the week-end the Victorian selectors will have a difficult task in reducing the number of applicants to 12, who will shoot a four days’ test over 300. 600. 900, and 1,000yards at Williamstown. The leading member after the test will be taken, while the other two will be selected from the remainder. It will be a gruelling test, and is sure to produce some brilliant shooting. The test will be fired about the middle of November. I understand that the team which will represent Australia will travel under the most favourable circumstances. and that nothing will be left undone to ensure their arriving at Bisley in perfect physical condition. When Mr. Woolcott-Forbes (Sydney) presented his cheque for £5,000 towards defraying the expenses he asked that this receive special consideration. Riflemen throughout the Commonwealth are deeply indebted to this sportsman for his magnificent gift. I was disappointed at not meeting Mr.Woolcott-Forbes during the New South Wales meeting, but business reasons made his presence in Adelaide essential. Had he been present at the presentation of prizes at Anzac range on Friday. October 16. he would have received a great ovation.