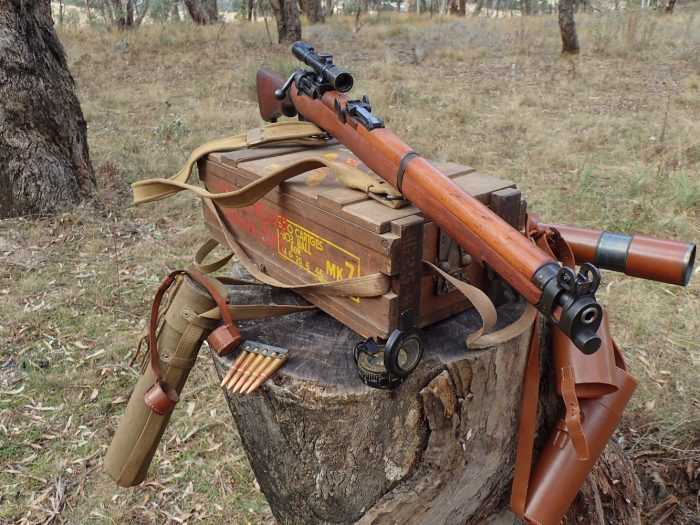 There are few people who are as experienced in Australian .303 rifles than Brett Anthes of Lithgow Australia. Here Brett lends his eye and hand to his Lithgow SMLE No1 Mk3 HT rifle. Here he tests it on his own private range and gives us an insight into the wartime construction of this classic. Brett Anthes is living proof that oral history and careful preservation of old rifles are a living part of our society.

From time to time, I see a reference to a test report on a certain scarce rifle and while the review is interesting in a historical context, by the end of the article, I am left thinking ” Well, how does it shoot…and how did it perform with the ammunition of the day ?” So rather than whinge about it, I thought I should start reviewing and testing old rifles. Over the coming months I will be testing a selection of our classic scarce military arms of Commonwealth origin and reporting my findings and experiences.

The original contract was for 2500 rifles in 2 models, today known as “high” and “low” mounts, very similar but with minor differences. The high mount sits approx. 1/2 an inch higher above the line of the bore with mounts that allow for an uninterrupted view of the rifles as-issued iron sights, while the low mount model naturally sits lower down and has a scallop removed from the rearmost top hand guard to facilitate installation and removal of the scope as shown on the test rifle. The low mount model’s telescopic sights are also marked with a /1 suffix on the tube to denote the model, apart from this both rifles are the same. On occasion a wooden cheek-piece was issued , though it was rarely fitted.

Over the years I have been lucky enough to own both models. The low mount model shown here presenting the best opportunity to conduct a valid test, having fired less than 100 rounds since built. Much has been written on the so called “love and dedication” in the assembly of these rifles with reference to bedding and fine tuning. Indeed many of you will be familiar with the Holland & Holland connection with the No4 T rifle assembly. Therefore I would like to outline what I feel is the true perspective of the assembly of these rifles.

Being born and having lived the better part of my life in Lithgow and with strong connections the SAF Lithgow, I knew the people involved with the job of assembling of these rifles during the war .

Mr Jack Robb, one of the workers at the SAF told me in the 1980s, “… there was no time for mucking around with bedding and the like, the pressure was on as we were pushing the Japs back up on the islands, we had to just get them out the door .” I asked him about test shooting them with the scopes on, he replied “…It never happened, the rifles were selected at random , maybe 1 in 15 and test fired at 100 yards in the Enfield Rest. Before fitting of mounts they had to group within a 6″ by 2 ” oblong, the scope was then electric engraved to the rifles number put in the case ready to ship it out and it was up to whoever received it to sort it out. ”

Jacks’ story makes a lot of sense. The Lithgow SAF was under a lot of pressure during the war. It was the base for the feeder factories in towns close to Lithgow that were in full swing producing parts for the rifle, with the town of Orange taking the leading role in rifle production followed by Bathurst, while Lithgow concentrated on Bren and Vickers gun manufacturing. A lot of these HT rifles before conversion were top class full-bore range rifles handed in, in many cases from not too happy rifle club members who thought they might come in handy against the Japs. Most were correctly bedded and regulated, many with good stable walnut fore-ends. These rifles were completely stripped, new barrels installed, fore-ends and timberwork replaced with the inferior locally sourced coachwood timber which was marked H and modified for the heavy barrel. The timberwork was made by Slazenger in Sydney, with the middle internal band dispensed with and the redundant hole in the stock plugged. (coachwood is a far less stable timber than walnut, more prone to warping and splitting. The other common timber found on Lithgow rifles is Queensland maple).

Over 90% of the actions used were WW1 Lithgow marked actions, as the SAF regarded them better both in metallurgical properties and the tolerances were tighter. New bolts were issued for these actions and some British actions from England were also used. I have seen the majority marked as BSA and one LSA . A WW2 Lithgow action is a very rare find on a Lithgow HT sniper rifle .

Some rifles had the metal work painted with a green corrosion resistant paint under the timberline to stop rusting in the tropics. Attaching the scope to the rifle relies on a front claw mount. The rearmost mount is locked into place with a overcentre lever arrangement typical of the Pattern 1914 sniper rifle. The Pattern 1918 telescopic sight was quite obsolete at the time, and was made locally in Melbourne by the firm Australian Optical Company differing from the British Mk32 scope in that the graticule is photo-etched on the lens.

Setting up the Scope.

The scope is adjusted in a set procedure.

1. Focus, under the tube a screw is slackened allowing a brass spigot to be moved back and forth to obtain a clear view.

2. Windage, remove the front ray shade , slacken 3 very small grub screws by turning the front lens segment either left or right with a special key. The image is bent via two lens, graduations marked on the front indicate each division as approx. 5 minutes of angle. N.B. altering windage alters elevation, thus once windage is set, elevation is to be checked.

3. Elevation, I like to check it at 200 yards always using as-issued MkVII ammunition for which the rifle and sight was designed. The top drum is calibrated from 200 to 1000 yards, to adjust slacken the 3 smalls screws on top of the drum freeing the drum to rotate to the set range, then once set tighten screws.

The rifle is now set up correctly.

The scope was issued with a canvas carry case to carry and store the scope. Most still retain the scope number chalked in on the case still asin service they were seldom used being liable to snag and catch in and on scrub. It was said that it also drew attention to the enemy, that the man with the case was a sniper. Leather lens covers also were part of the scope kit .

At the back of my house I have set up a 100 yard range for rifle testing. Two types of MkVII ammunition were used to test the rifle, which is exactly the type of ammunition that the rifle would have been issued with

I chose to shoot off the shoulder without a rest using the webbing sling run through the as-issued king screw swivel fitted in front of the magazine as a aid to steady the rifle . The trigger has not been touched and is the standard affair. I fired a few rounds to get a feel once again of the rifle, with the shots going close to the point of aim.

It was quite refreshing to have the pleasant smell of cordite linger once again in the air. I then settled in for a 5 shot group using the MF56 cartridges taking a 6 o’clock hold on the top of the post within the Pattern 1918 scope and fired 5 rounds without checking or making adjustments. Walking to the target I was reassured the old rifle was still capable of a good show with a 1 1/2 to 2 inch group very close to the point of aim.

I decided then to fire a 3 shot group using the CAC 1929 issue mark 7 cartridges , being the early cupronickel jacketed projectiles and well aware of the metallic fouling issues of using it I settled in once again this time selecting a point of aim in the centre of the black aiming mark , to my pleasant surprise to group showed very little variation , somewhat to the right a fraction but measuring approx. 1 1/2 inches , sight setting throughout on the range drum was 200 yds.

Going back through my records in my range book to 2005, I noticed the best score achieved with this rifle was 47.5 out of a possible of 50 at 800 yds. at Lithgow SAF range firing the same MF 56 cartridges on 7.62 full-bore targets and the average throughout at all various ranges would be somewhere close to a 45.

After shooting, the bore was cleaned by running hot soapy water through it with the aid of a funnel from the breech to neutralise the potassium chlorate residue from the primers, then dried with patches, finally a patch with Ballistol through the bore and a wipe over the rifle with that patch left it in good stead.

History and experiences in service

These rifles really appeared too late in WW2 to make a difference. The P14 sniper rifle was the mainstay of the Australian forces through the period , however in 1945 the rifles were to see limited use in the closing stages of the Pacific. The HT’s moment of glory came in Korea where the rifle was used to good effect at long range.

Private Ian “Robbie” Robertson of 3 RAR sniper section use this rifle to good effect out to 1000 yds. at Hill 614. In Robertson’s words
– the rifle was capable of putting 15 rounds on a fist sized target at 300 yds.
– head shots were possible at 600
– and if conditions were right he was confident of hitting a man at 800 to 1000 yds.

Robertson was wounded in action in 1951, after recovery he competed in the 1952 Kings Prize and finished second. Considering the amount of men engaged in .303 full-bore rifle shooting as a pastime during these periods it certainly stands as a testament that ” this bloke could still shoot. ”

These rifles were brought out of storage in 1976 , no doubt due to lessons learnt in Vietnam, with the re-opening of sniper training at Singleton army base in NSW, and remained the army’s sniper rifle until 1979 when finally replaced with the Parker Hale M82 in 7.62 and Khales Helia telescopic sight.

The Lithgow HT sniper rifles were sold off through the rifle clubs and many of the riflemen in rifle clubs got their hands on them . Some of the riflemen were farmer or graziers who brought them as a cheap ” roo gun ” as surplus .303 ammunition was still in plentiful supply.

Today these rifles have become quite collectable, out of the original contract of 2500 only 1131 high mounts and 481 low mounts were produced and the survival rate has not been high. In my opinion, they are not in the same class as the No4 T with the excellent Mk32 telescopic sight. The Lithgow HT being a lot more ” finicky” and the pattern 1918 scope not as robust. It pays to remember that in Australia, this was what we had, and what we had to deal with. The Lithgow HT is good wartime compromise which has now become an interesting rifle which is now quite scarce and collectable. Most of all it is a lot of fun to shoot on the range .

Soon we will compare “the sniper three”: The HT, the No4 T and the pattern 1914 T sniper rifle. This will be done in a test at the range in Australia, so please keep your eye on Transcontinental Shooting for that review.