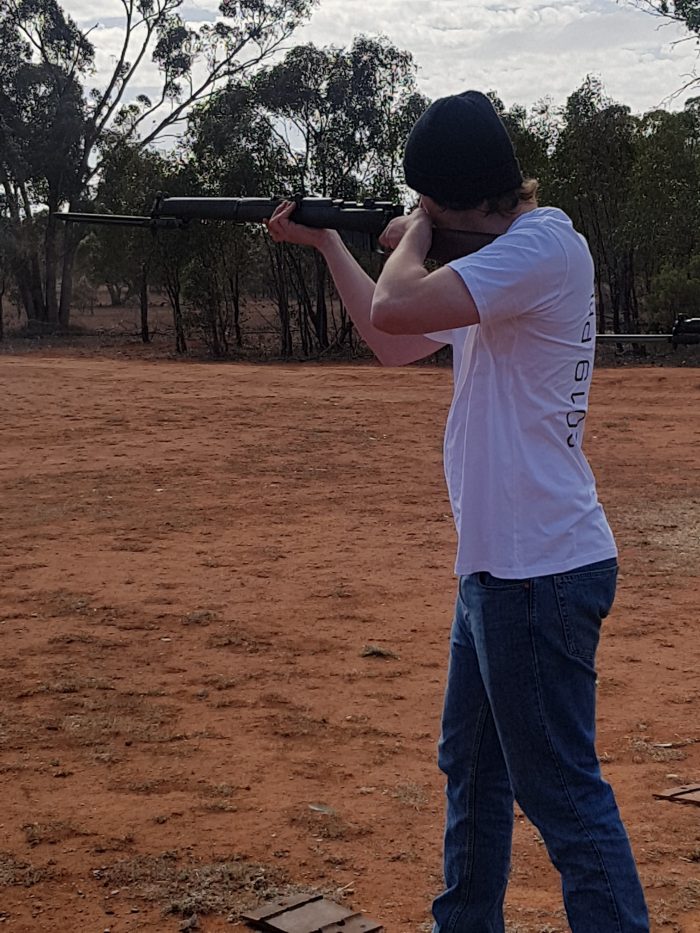 The BIG event in the form of LERAA’s first sponsored prize. A prize pool of $1000 donated by our sponsor Condobolin Milling was up for grabs to the best shooters of Lee Enfield rifles. After our successful Great War Prize at Rankins Springs Target Shooting Complex 29/30th June, we were pleased to accept sponsorship to bring it back to Rankins Springs one more time in 2019. Months of planning and marketing sprang into action. Advertising went out via social media to over 70,000 members of Regional pages for three months. A commemorative tee shirt and event sticker were designed and supplied to attendees. After our event in June we implemented an online registration form , formalised procedures for scrutineering, streamlined our shoot procedures and expanded our target array from 4 to 6 target lanes. Many hours were spent in conversation and strong debate amongst the Event Co-ordinators and the Executive Committee all leading to an excellent event conducted within the spirit of LERAA and a confirmed ability of our club to hold open events in a professional manner.

Our usual merry band of suspects were now well prepped to make the journey to Rankins Springs. Some registrations by new shooters added to the group and the weather report promised clear skies, warm sun and wind. Friday night brought great excitement as the tents were erected, camps set and people settled in. It was great to see families and children playing and enjoying the wide open spaces on bikes and foot. Organisers were openly chuffed as the night fell and the camping paddock filled with tents and lights. Old acquaintances remade and new mates made of Tom, Tony, Allan, Darren, Kyran, Duane, Fluffy (Andrew) and most importantly the delightful Jess. Andrew’s dog.

By now LERAA members have become mildly immune to the cries of the red secretary bird and many members were up and about admiring the erections that dotted the range. Kudos were given to Andrew and Duane whose period cotton tent included wood fired stove and chimney. The surprise arrival of El Presidente late evening was met with great surprise. His ability to negotiate time off with the delightful Mrs El Presidente has now entered the annals of LERAA history

The flags were raised and the dedication to those who served at the battle of Maryang-San was delivered by Jeff. Tags were presented to our past winners and also to our new members. Hands were shaken, backs were slapped and the mischievous games began. A new chalk scoring board took centre stage…ready to record the successes and the less-so of our shooters. Our previous experience of registration and scrutineering came to the fore and shortly after, first shots were sent down range at 9:00. Day 1 was the battle of the Tags….yes $1000 was up for grabs but amongst the LERAA men and women…its all about THAT gold tag. There were 3 practices at 200 yards, standing bayonet fixed followed by kneeling 3 second exposures, ending with prone rapid fire 60 seconds. The new target frames accommodating 6 lanes moved the shooters through quickly. The scores were posted after each group and the ebbs and flow of the leaders was dramatic. Again it was consistency that wins the day….many had a good stage or two BUT it was the shooters who could put it all together across the 3 stages that rose to the top.

By the end of Day 1 Murgo took out the gold tag with a score of 97 followed closely behind by Paul Mc 94, then we had our beloved El Presidente storming home to steal the bronze tag  with a score of 90 from Andrew who had a very credible score of 89 for his first time shooting with LERAA. Lunch was a wonderful sausage sizzle. Many thanks to Toby and Peter for organising and supplying all the goodies. A good butcher snag certainly shows up those supermarket pretenders

After the shoot some people headed off to town to check out the local “Spring at the Springs” festival. Our traditional evening dinner took place and many stories and tall tales were told. This shoot was the release of our new hat patch….and Dave had the great job of finding the next person who would proudly discover his talent of camping without ever using his swag. Around the fire we all gathered until Dave uttered the immortal words “I think I will have just one more…” with the experienced souls scattering to their beds instantly with many laughs. Who did stay up with Dave?

On Sunday morning we re-commenced the Condobolin Milling Prize Shoot that involved 3 challenging practices using 3 historic styles of targets taking place at 200yards. First practice10 shots at tin hat targets in your own time while positioned prone. Second 10 shots kneeling bayonet fixed in your own time at the aptly named bellydance target. Finally 10 shots rapid fire 45 seconds on that landscape target. It really plays tricks with the eyes. The final stage was a close finish and it would take a special effort from the eventual prize winner

The Condobolin Milling Prize Shoots winners are: 1st place Murgo with an amazing grand total of 199.2. He needed 8 bulls in the final stage if he was to win…and that is exactly what he did. In second place Andrew with a score of 187.1. Well done Andrew and thanks for being part of the great weekend. 3rd place was Allan with a score of 175.1. Well done Allan who was a consistent performer both days

Prizes were kindly donated and presented by Tony of Condobolin Milling and we would like to thank him for supporting this sport, which complements his interest in regional mental health. Tony is keen to support this regional initiative for 2020.

During the shoot an amazing feat was achieved by Paul Mc who shot through the compass hole (Pinhole Bull) which was the first in the history of LERAA. Paul was awarded with the special pin trophy by El Presidente

Special thanks to Simon, Peter W and Myles for supplying and transporting our wonderful targets. Murgo, Jeff, Myles and Peter W for organising and running a successful shoot at Rankins Springs, The Baker boys who set about keeping the targets up on the frames, the Dubbo men for catering on both days and special thanks also to all the people that brought their family along to see what it was all about and have some fun. The kids got totally filthy…the red dust smeared over their smiling faces summed up the good times had by all.

Lastly, but not least the biggest thanks go out to all the members and guests who show up and make all these shoots possible because without all of you none of this would be  possible.

See you all in Hill End for the H.C.Fluke Trophy!