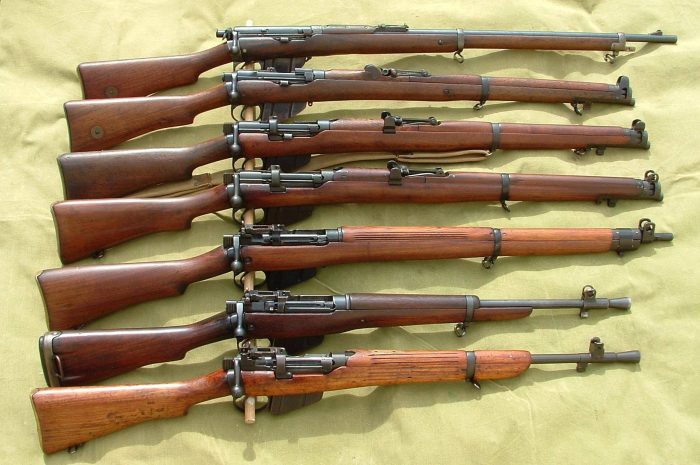 The history and development of these rifles since the late 1880’s.

When governments around the world began to embrace magazine feed rifles for their military use, Great Britain and the expanses of the British Commonwealth had to get into step. They adopted the magazine and receiver design of James Paris Lee and a barrel design by William Ellis Metford for their first production.

The rifle was the Magazine, Lee Metford or “MLM” Mk1 in 1889. The naming conventions used described the rifle type (magazine feed) and it’s designers (Lee and Metford) and a model designation (Mk1).

You will see that when smaller improvements were made, the model name was advanced though the use of asterisk and extra Roman numerals after the “Mk”. Understanding the naming conventions is very important as one misplaced mark could change entirely what people think they are looking at or misunderstand what you are talking about.

A couple of advancements went through the MLM Mk1*, then MLM MkII and finally MLM MkII*. With the end of black powder and the introduction of hotter propellants, the shallow Metford design rifling would wear out and render barrels unusable after approximately 6,000 rounds.

The new model became the Magazine, Lee Enfield Mk1 or MLE Mk1 in 1895. This rifle retained most of the overall design feature of the earlier model, including the 30″ barrel length. The model’s improvements saw the MLM Mk1* in 1889. During the time of the MLM and MLE rifles (commonly called the “Long Lees”) there were also carbine lengths; models made with 20″ barrels for special use like Cavalry and Artillery, but not diving that deep here. At the start of the 1900’s the W⩚D (War Department) decided to standardise their service rifle and the compromise was made to manufacture one rifle for all with a 25″ barrel, half way between the two in use.

The result was the Short, Magazine Lee Enfield. This name refers to the length of the new rifle (short) and the old designation of the magazine feed, receiver designer and barrel designer. The first model was of course the Mk1, or Sht L.E. Mk1 in 1903. There were a few models of the Mk1 design that were conversions of the Long Lee rifles, but again, wont dig that deep here… the model names again being the important thing to get right. The Sht L.E. Mk1 went through to the Mk1* in 1906. The biggest feature that the shorter rifle added was the ability to load from above with five round chargers (not stripper clips). Chargers uses the British manufacturer’s terminology rather than generalisations commonly applied from other country’s firearm manufactories.

The next step was the Sht LE MkIII which further improved the loading with the addition of a solid charger bridge over the receiver. This model advanced to the Sht L.E. MkIII* largely due to removing some features for ease of production due to WW1. There were quite a few other models in the line once again on conversions from previous models… the British never wasted anything! In 1926 the decision was made to standardise the service rifle under a simplified naming convention and the MkIII and MkIII* rifles became “Rifle No1 MkIII and Rifle No1 MkIII*”.

Rifle No2 MkIV designation was given to the .22 trainer versions that were the MkIV. Any other models were specifically NOT included in the nomenclature, so for example, the Sht LE Mk1 did not become the No1 Mk1, there is no such thing… It simply remained the Mk1 and was made obsolete. The Pattern1914 Enfield rifles from WW1 became the Rifle No3 Mk1.

Before WW2, RSAF Enfield factory engineers were tasked with simplifying the overall rifle to make production faster and cheaper on more modern machinery. The Enfield Rifle No4 was born, noting the changes made were so great that James Paris Lee’s name was dropped from the nomenclature. This rifle also went through some improvements, the No4 Mk1* and Mk2 as well as a couple of sub designations for on converted models.

The No5 was intended to replace the No4 as the service rifle, so the term “Jungle Carbine” has no validity in the system, but hey, ok a jungle carbine is a jungle carbine, I can live with that…

Australia didn’t make the No4 rifle, sticking right through into the 1950’s with the No1 MkIII* but we did do some experimentals based on shorter design No1 rifles; the culmination being the Experimental No6 Mk1 and No6 Mk1/1 models.

This article and photographs have been provided courtesy of Brad Hedges.