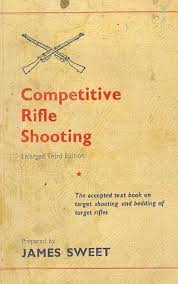 Jim Sweet, Gosford optometrist, led the King’s field after the first two stages at the Enoggera rifle range yesterday. Sweet has changed the lenses in the peep sights of 30 of his opponents’ rifles since he arrived here on Friday. Among his ‘patients’ are Hilton James, Roy Feltham, and Alec. McDonald, who are among the leaders.

The final stage will be shot to-day over 600, 800, and 900 yards ranges. James was one of the two marksmen who shot possibles— 50 out of 50— over the 700 yards round yesterday. The other was red-haired Bill Dean, from Tasmania. He is a son of Ted Dean, at present in England with the Australian Bisley team. Gill Grummitt, who shared second place with James, is a City of Brisbane clubman. Early in the afternoon it looked as if his 195 would lead the field. Eric Gittoes, the fourth man.is a Parramatta clubmate of James. He crashed from a leading position with a 44 out of 50 in the first, round of the second stage over 600 yards.

L. Morris ( Commercial) and L. J. Bingham (Mungindi, N.S.W.) divided first prize in the J. M. Smith rifle shooting match at Enoggera today. Each scored a possible with 10 shots at 500 yards, and instead of shooting off they decided to divide the prize money. Competitors from N-S.W. and Queensland shot for the A. L. Halliday Memorial — the aggregate over three matches, the J. C. Mackenzie, the J. M.Smith and the Black and White Cabs matches.Conditions were almost ideal with fair visibility and only a light breeze.