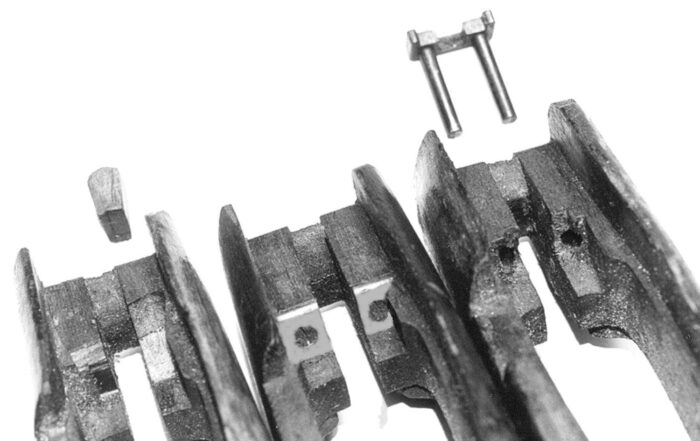 Just had a query about the copper blocks fitted on Aussie fore-ends… thought you all might be interested.

Early Lithgow furniture did not have copper recoil blocks fitted. We had quite a lot of parts and some unfinished, from Enfield as their view mark and Efd is found on a few early Lithgow SMLE rifles, such as magazines.

Then in 1927 they started to put walnut blocks in for recoil protection to prevent splitting of fore-ends, done at SAF Lithgow. But not every fore-end, it seems.
In 1935 they tried the double extended pins on the stock-bolt retainer (see p.15 SAIS #19) but again not used on all fore-ends. It was done in production at Lithgow.
Then in the late 1930’s they started putting copper blocks screwed into position but this was done at Army and Navy ordnance depots. It was not done at SAF because spare fore-ends from Slazenger or Lithgow needed to be chiselled out to fit the copper blocks.
We note occasional rifles with fore-ends factory fitted without the copper recoil blocks as well. So the mod was not done at Lithgow. This applies equally to Coachwood and Qld Maple stocks.

See page 15 of my SAIS #19 ‘Australian SMLE variations’, now in stock again after we found a few cases in our US storage sheds. Click here for Ian’s website

More stuff on proofs, markings etc in my new ‘Broad Arrow Mk 2’ book as well. Don’t delay as the Hard Copy edition is already sold out.