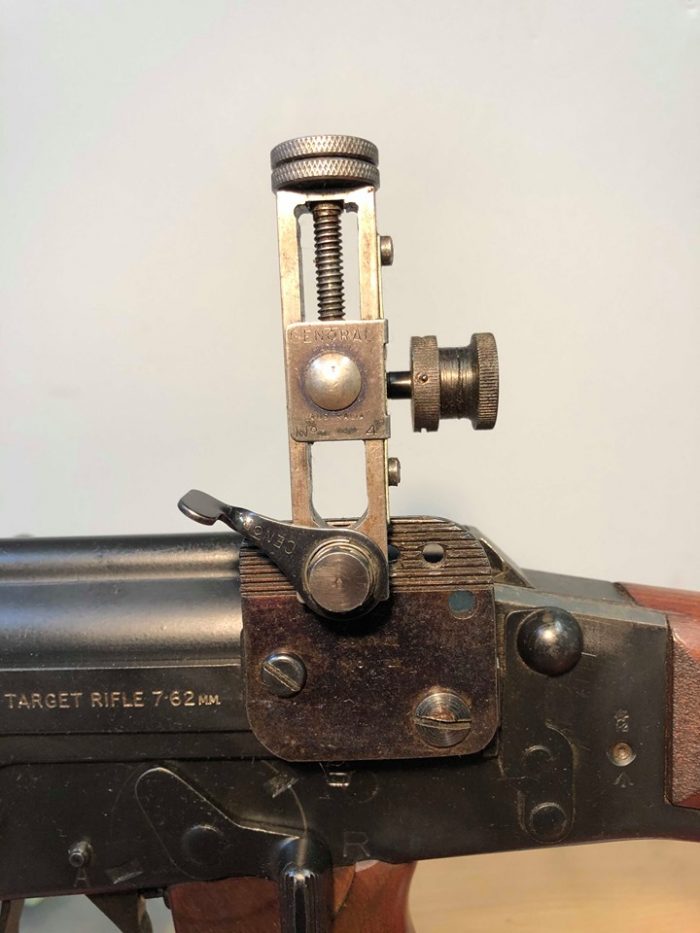 The Central aperture sight has been a staple of the Australian target scene since the 1930’s. Whilst Parker Hale owned the British scene, Central, owned by the Dunn family of Victoria produced many target shooting tools for the Australian target shooter. In a market with many competitors, Lane, Mues and Rawson to name just a few, Central aperture sights were very widely distributed and to many here in Oz were considered the sight of choice.

This week we were presented with a rather unique version of the Central sight by a regular contributor George White. To all intents and purposes it appeared to be a bog standard No4 until you suddenly glanced at the markings. The Central sights were generally manufactured in Victoria, not marked as such, just Central No4. This particular example presented with some unique heritage.

“Made for Central by SAF Lithgow” stamped clearly on the upright piqued interest in all who took the time to note this detail. For many this was something they had never seen before, for some, never heard of before and for some a lot of questions as to how this came into being.

To the books! Pulling out our “Go to” publication, “The Lee Enfield” by Ian Skennerton I rushed to the index and started turning pages hoping to have a fast resolution to this sights existence. Ian references Central sights and goes into some detail about SAF manufacturing the Central mounting plates. These plates are the Argyll plates and can require a small shaving of the fore-end to allow a perpendicular fitting. Many are marked as Lithgow manufacture and can contain military acceptance markings. There was a mention of Lithgow manufactured sights but not a clear reference that could explain the existence of this example.

Serendipity visited this morning when I was asked to track down a copy of “Accurising and shooting Lee Enfields” by Brian Labudda & Ian Skennerton. A long out of print publication, I pulled out my PDF version that is now available on the fine Small Arms Series Live No1 303 SMLE DVD/CD. After providing the details to the enquirer, I sat down with a warming brew and reacquainted myself to the fine story telling and instruction provided by these fine upstanding shooters, collectors and Lee Enfield gurus. With a flash of light, a clap of thunder and angelic chorus I turned to page 33 to discover part of the story behind the sight that had been presented to us.

Post war SAF had been contracted by Central to manufacture a number of items at Lithgow, the No4 sight being one of them. These sights were stamped “Made for Central by SAF Lithgow”. A number of complaints were made as to the manufacturing process and these stamps were struck out at the factory. What we have is one of the few, maybe the only one, that somehow missed this strike through.

We always welcome contributions from our good friend Brad Hedges and he duly rushed off to sort through his collection to see if he had any further examples. Brad was able to locate one of the SAF Lithgow manufactured sights that had been struck through. We now have photos of both examples.

We do not know why Central asked SAF Lithgow to manufacture for them, assuming they already had a functional manufacturing plant from pre-war. We would love to see any more examples of these sights and welcome any further information on their existence.

An excellent research article by Andrea Grazioli can be found here. Use Google chrome and it will auto translate the page into English